DETERMINING VALUE: PURCHASING A NEW MOTORCYCLE VS A PRE-OWNED MOTORCYCLE

WHICH IS RIGHT FOR YOU? A HARLEY® PERSPECTIVE.

When considering a motorcycle purchase—or any significant purchase adding insurmountable value to your life, there includes a number of factors to consider in order to determine the best option for you.

We’ve described six items for consideration when weighing between purchasing a new vs. pre-owned Harley-Davidson® motorcycle. These steps will help you with your decision.

As with all financial matters, a budget is the first thing to determine before weighing the options between purchasing a new or used motorcycle. With a budget, assessing value and determining the best fit will be a lot easier.

Harley-Davidson® is noted as the most customizable motorcycle. There’s no need to worry about blending in with the crowd, as customization opportunities are limitless. To customize a Harley, new or used, in any way you like. With budgetary matters in play, it’s really up to the individual to decide how much they are willing to spend on customization.

Most technicians however, will argue that it is more practical to customize a used Harley® (1) than a new one. A few reasons for this would include the greater market for parts and the readiness of information about the bikes and their mechanical behavior. A new motorcycle may have less information available for technicians to understand and study the behavior of these newer models.

Most buyers who lean toward purchasing a new motorcycle desire the new because of the ready-to-go features and aren’t interested in customizing with alternative parts or accessories.

Many buyers prefer purchasing a new motorcycle because of the clean slate they offer in functionality and reliability. Both new and experienced riders may prefer not to have a lot of complications right at the bat. A new motorcycle offers ease of mind in this area.

A pre-owned motorcycle may have been well groomed and cared for, even after thousands of miles from dedicated riders. However, there is always some risk. Scrapes and scuffs can be indicators of damaging crashes that may affect the performance and overall condition of the bike. However, a little more conversation with a trusted dealer can really help clarify any questionable concerns, especially since so much of motorcycle dealing is built on connections and relationship.

With a little conversation, you can find a pre-owned motorcycle that’s had a great history with unique customized features from previous owners.

One the most assuring benefits of purchasing a new motorcycle includes the warranty. “Harley-Davidson® warrants for any new Harley-Davidson® motorcycle sold that an authorized Harley-Davidson® dealer will repair or replace without charge any parts found under normal use to be defective in factory materials or workmanship. Such repair and replacement will be the sole obligation of Harley-Davidson® and the sole remedy for the owner under this limited warranty (2).”

In contrast, extended warranty service plans are available on pre-owned purchases, but often they can quickly add up in price.The best solution to determining warranties on any vehicle is to talk to a Sales consultant.

In any case, financing is based on a scale of attainability and is an area you’ll want to consult a Sales professional to learn what financing options are available to you.

It’s not unknown that new motorcycles offer the latest safety technology on the market. Reflex™ Defensive Rider System is an all new package for 2020 Harley-Davidson® LiveWire™, CVO™, Police, Trike models (trike-specific RDRS), and optional for all Touring models (with the exception of the Electra Glide® Standard). This package includes both familiar systems and new ones. The new features of the 2020 RDRS package includes features like Cornering Enhanced Electronic Linked Breaking (C-ELB), Cornering Enhanced Traction Control System (C-TCS), Drag-Torque Slip Control (DSCS), among others (3). A new unit called the Intertia Measurement Unit (IMU) measures the lateral movement of the motorcycle, influencing all angles of motion to enhance the breaking systems, forging the 2020 models as truly the best in line (4).

There are plenty of reasons to stay up to date on tech, of course. New infotainment systems are speedier, allow device connectivity, offer full touch screen capability and voice command, and have interactive mapping systems for convenient route planning. Older models may prove to be more of an inconvenience even with a nicer price tag in this area.

If geeking out on the latest tech is important to you, you may want to consider purchasing a new motorcycle.

To conclude, the truly best way to decide between purchasing a new motorcyle versus pre-owned motorcycle if you're on the fence, is to ask lots of questions. The purchasing options are limitless, and, there’s truly something for everyone. As always, there’s no better time to ride than today.

We asked our new friend, Farah, how she got into riding motorcycles and little bit about her riding story. Farah purchased her first motorcycle from us, a 2019 Iron XL883™. Originally from the Netherlands, Farah moved here to be an Au Pair, a child care provider through an international cultural exchange program here in the United States. 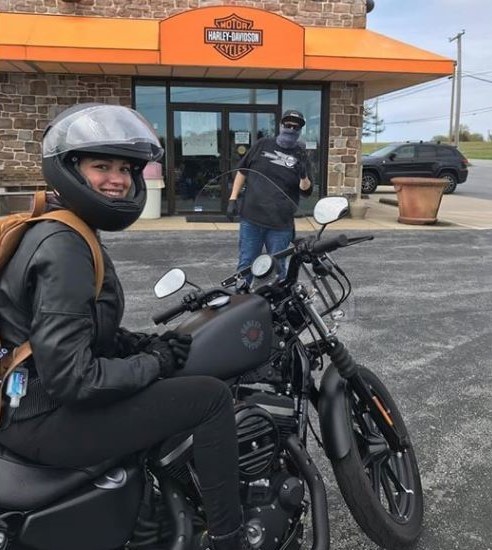 From Leeuwarden, the Netherlands

"I believe it all started when I was dating my first boyfriend when I was 15-16 years old. That time in the Netherlands you could legally smoke from the age of 16 and we would smoke inside his garage where his dad had this huge and heavy Harley-Davidson® stored. I can’t remember what model it was...but whenever I went for a smoke, I just sat there staring at that thing, fantasizing how cool it would be me driving that bike on the open road.

A few years later my dad, Foppe, now 64 and still riding, came home one day with a bike. I didn’t even know he had a motorcycle license, so that was a nice surprise. I was so excited and couldn’t wait to hop on the back.

“We shopped for new helmets together and went out for a ride a couple of times. I thought it was the coolest. Thing. Ever.

From that point the idea [of owning one] grew stronger and stronger.”

WHEN DID YOU START RIDING?

"So two years ago when I was thinking about 'what to do next in my life?'

I found an opportunity to work as an Au Pair in the United States...

I thought 'this is it!' it all just clicked. And I already saved some money which was enough for a license.

I mean...going to the States for a nice job, buying a bike and drive cross-country, ride Route 66? That is the ultimate dream! And now I am finally starting to live it. At first, I was scared to tell my Dad that I wanted to start taking lessons and that I wanted to drive through America...but he supported me right from the start without any doubt! He is the coolest and best parent ever.

It’s only been almost a year since I got my license. But every time the weather was great and I had some spare time left, I would go for a ride. I already got thousands of miles on my watch."

My host Dad from Au Pair and I went shopping motorcycles together, he actually pointed out this bike to me and I fell in love with it. He supported me a lot in finding a bike and to figure out how to get it, which is super amazing. Now there is an Iron  883™ standing in the garage, my host dad wants to buy a motorcycle for himself too! He’s the best and I am really, really happy I can be part of his family. And, I consider them my family, now, too."

YOU MADE A BIG MOVE TO THE STATES AND DECIDED TO KNOCK OUT SOME AMAZING DREAMS! WHAT DO YOU LIKE MOST ABOUT RIDING?

Every time I get on the bike I just feel so much joy and excitement. Just seeing my bike sitting in the garage puts a smile on my face! The control, the speed, the view...it’s my happy place. It’s the only way to clear my mind, for real."

HAVE YOU TRAVELED CROSS-COUNTRY OR GONE ON ANY MEMORABLE TRIPS?

"I remember first time riding solo after getting my license I was out for hours! I think I was gone for about 4 hours just riding through my province. When I got back, my cheeks were hurting from smiling the whole time.

Back home the furthest I’ve driven is from Leeuwarden to Rotterdam (around 2h drive) for a birthday party and I was following my friend who was driving by car and she was the one that had the navigation running. While we were heading over there I read some exit signs and was pretty sure we needed to take that one. Next thing I know she called me (I have a Sena communication system) and told me she missed the exit - while missing the second exit we needed to take! I thought that was really funny.

In the end: we missed a handful of exits, took some wrong turns and almost witnessed a car crash happening. So we arrived later than we initially wanted to at the party."

DO YOU SHARE YOUR RIDING EXPERIENCE WITH ANYONE? FRIENDS OR FAMILY?

"I talk about it a-lot, haha. And I love taking people with me for a spin. Especially when they’ve never sat on a bike before! Some even scream from excitement.

The moment they take off their helmets and start talking how they experienced it... that always makes my day.

Whenever I go out for a ride I’ll always post a video or picture on my Facebook and Instagram (@elevenseasons) for my friends and family to see. I get a lot of comments that people really like seeing my updates. Also because for us Duchies, America is a different planet, haha!"

WHAT’S A FAVORITE MEMORY FROM YOUR RIDING EXPERIENCE?

"Oh, yes...so the first time my best friend Tanja ever sat on a bike was on the back of mine - and she loved it! Every chance to go out for a spin together we took it.

One quite sunny day we took my bike to drop her off at her mom’s place, which is a 30 minute drive away. When we just entered the highway, out of nowhere, it started to rain. And not just rain... it was POURING. And, of course, she wasn’t really wearing any kind of rain resisting clothing. Even through the seams of my leather jacket it started to leak water. I imagined her being pretty drained, cold and probably really pissed. Or maybe even scared... Because it was her first time driving through any kind of rain on a bike and the road looked so, so slippery... I felt so bad for her and hoped she wasn’t panicking or anything.

When we finally arrived at her mom’s place and she was mounting off I was already starting to apologize, but she cut me off screaming 'THAT. WAS. AWESOOOOOOME!!!'”

WHAT DO YOU HOPE TO TELL OTHERS ABOUT THIS GREAT SPORT?

"Freedom, dare to dream, and live a little."

For professionals and informational reading on motorcycles, culture, and future thought on the amazing sport.

For the "Family" feel and stay informed of what's happening with us!

Sign up for our Newsletter for specials, deals, and the real in-the-know of dealership events and more! 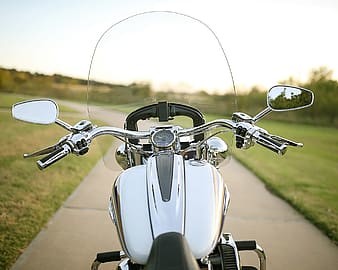 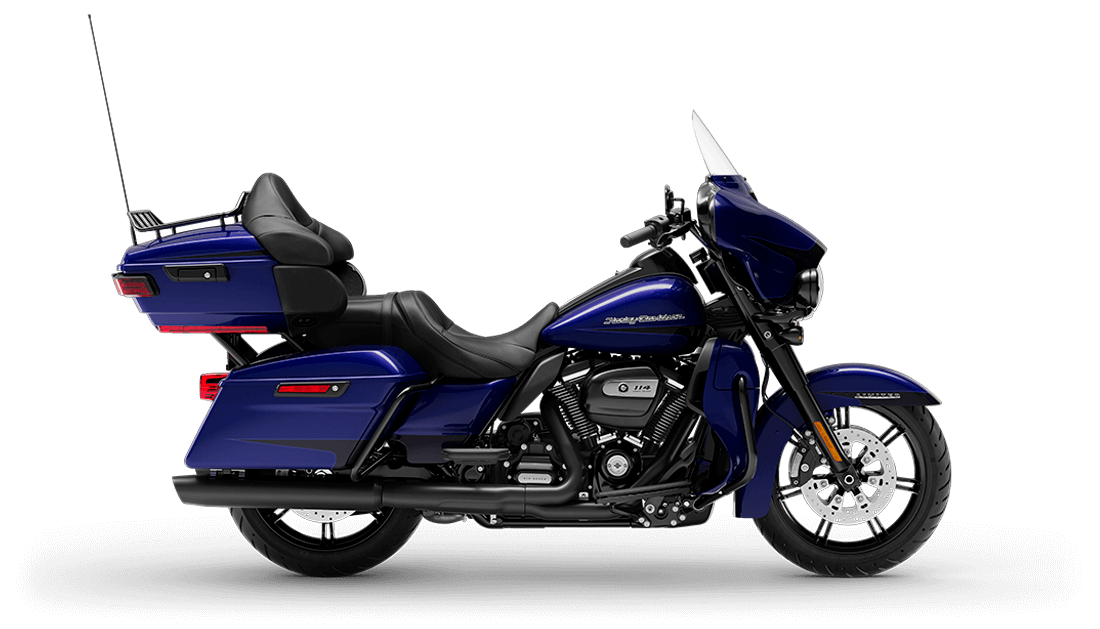 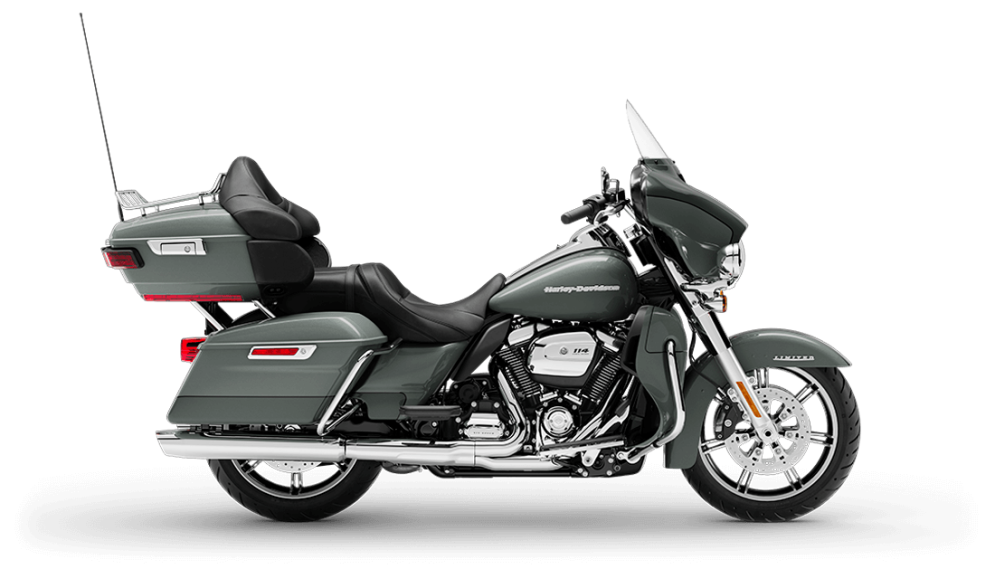 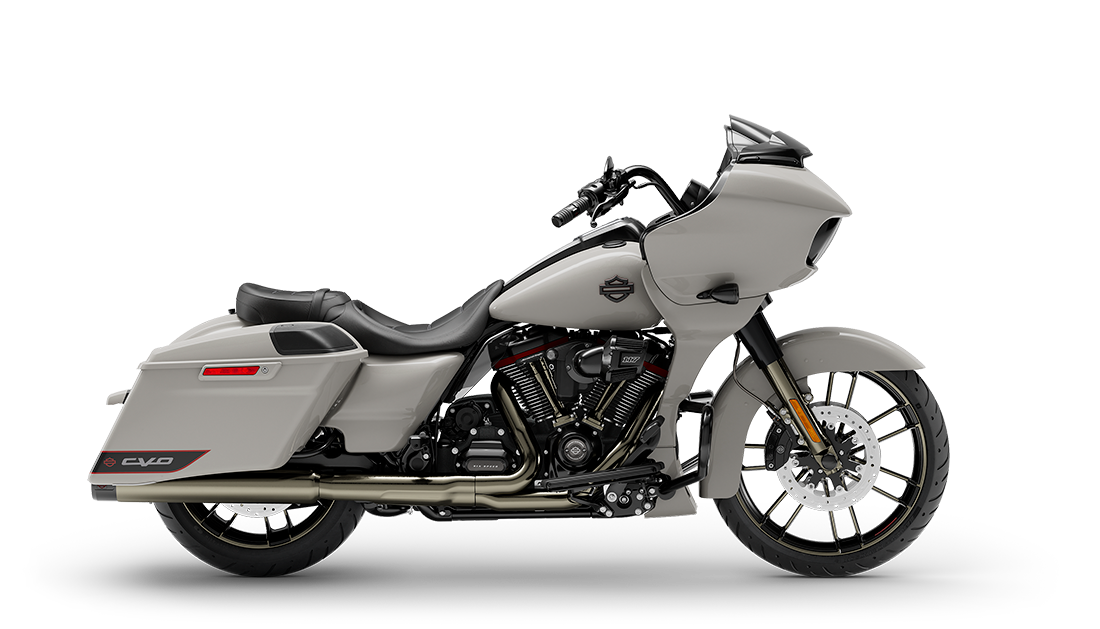 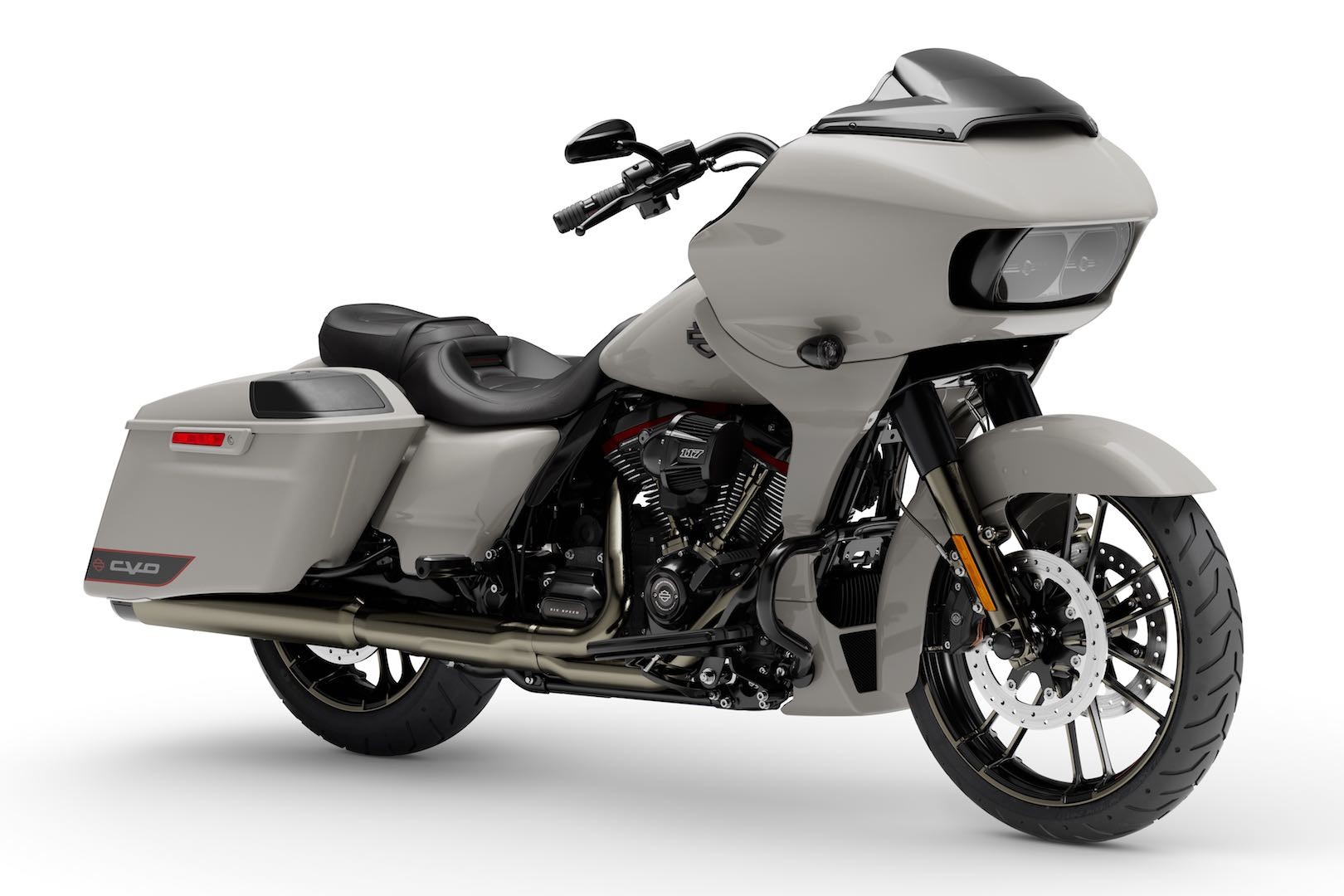 We're looking for committed individuals to be a part of our team of passionate motorcyclists! We offer competitive benefits, store discounts and bonuses. Visit our careers page for more details! 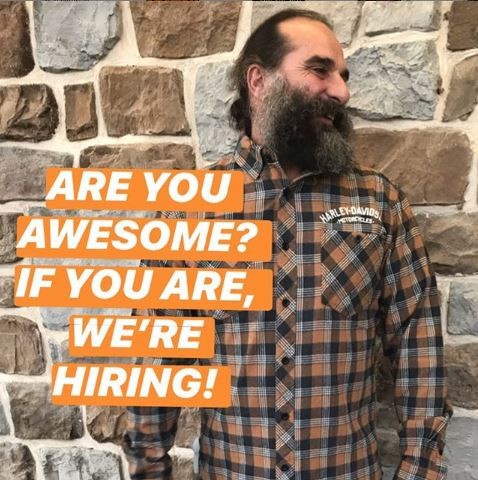